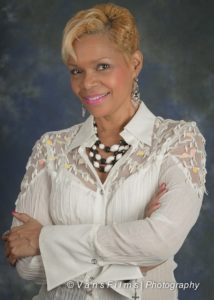 Established April 1992 in Los Angeles, CA. Stevie and flowers share the same attributes. When Stevie Flowers greets people, her face blossoms into an oasis of friendliness, spreading a contagious cheer. And much like a special floral arrangement, Stevie Flowers personality is disarming and invokes calmness and quietude. There must be some spell that Flowers – and her flowers – cast upon her clients and friends. How else do you explain how a former administrative assistant from Baltimore used her gift for flower arrangements as a ticket to “Oprah’s Oxygen Network”.

Not only that, Flowers is so gifted, so succinct and precise in her ability to arrange flowers that she was selected to decorate Hollywood heavyweight Samuel Jackson’s 50th birthday party. And to top it all off, Stevie’s last name really is “Flowers”. Are the planets aligned in her favor or what? Additionally, the Baltimore native has made floral arrangements for several NFL Super Bowl parties, one of the country’s greatest annual events. Stevie is invited to each Super Bowl city to participate in their “Minority Empowerment Program”. Stevie teaches other minority business hopefuls how to do business with the NFL. “I was a makeup artist, so I know how to blend colors. And that’s what you do when you make floral arrangements,” she says – beaming brighter than one of her colorful arrangements. “They kind of tell you what to do and where they want to go. Once you get your rhythm, it’s on.” Flowers certainly has a rhythm going. The event planner and florist has created the ambiance at the Soul Train Music Awards, the Peoples Choice Awards, France Ford Coppola’s film “Dracula”, The NAACP Image Awards, Grammys, Lady of Soul, and BET awards shows and even worked with stars like Samuel L. Jackson, Bill Duke, and Stevie Wonder, and many others during her 30+ year career.

In fact, on Friday, December 30, 2011, Stevie completed her last round of 29 radiation treatments and has successfully recovered from stage 4 breast cancer. On January 3rd – 7th, 2012, she set up 100 centerpieces, and other decors for the 2012 Trumpet Awards. It was an affair that left her breathless, yet truly excited as to how her energy level had so quickly returned. Stevie was released from her oncologist, April 11, 2019, 8 years to the date that she started her breast cancer journey. Stevie is now CANCER FREE! Stevie Says”I really love what I do. It’s a true labor of love”, she says through her bright smile. Humbly, she credits her early success to a “who you know” kind of thing. Let’s see: her Baltimore friend Tony Bulluck was Whitney Houston’s tour manager. Backstage during Houston’s concert, Flowers met VicAngelo Bulluck, Tony’s producer cousin, and the rest is history. The business has been on and poppin’ ever since.

Seriously, Flowers credits the Almighty for navigating her towards this prosperous and exciting career. “So I’ve been blessed. I’ve been truly blessed,” she says almost breathlessly. “It’s not me, it’s God. And a little bit of flower power.”